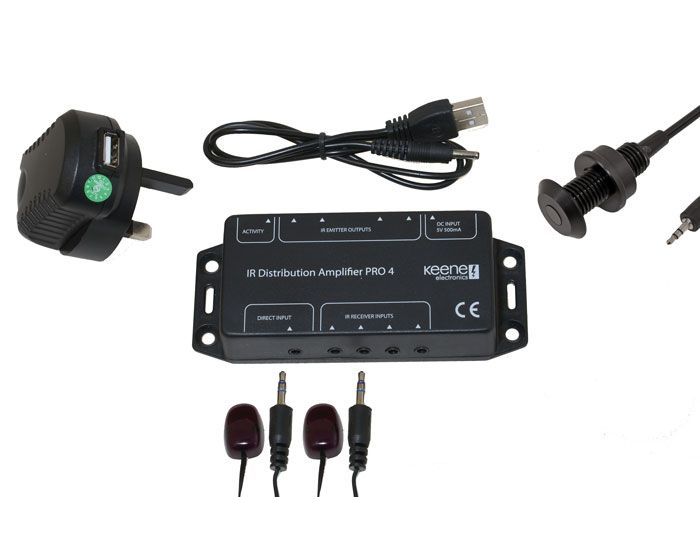 Skip to the beginning of the images gallery
Main Description
The Keene IRPKIT PRO4 is a high performance IR Distribution Amplifier. It allows you to use your remote control on equipment located in positions where your remote wouldnt normally work. For example, equipment placed inside cabinets with closing doors or located on shelves behind you or around a corner. The IRPKIT PRO4 has unique BestSelect circuitry allowing you to use multiple IR receivers within the same location for maximum reliability. The flexible design allows for a number of configurations that will solve most IR control problems.

BestSelect input switching
Normally if multiple IR receivers are placed in the same catchment area, the signals received are slightly out of time with each other and when fed to a distribution amplifier they produce a corrupted signal that will not reliably operate the equipment. BestSelect switching solves this problem, allowing you the freedom to put any number of IR receivers within sight of each other. Receivers can even be placed each side of a large display or in difficult to reach parts of a large room without any problems. BestSelect works by automatically switching off all the other inputs the instant that the one with the best signal becomes active. This state is held until the current IR instruction is completed and the switch is then reset to give a clean response every time. As the outputs from this amplifier can be fed into another IR distribution amplifier, this unit can be used as a sophisticated four input extension for another unit. Or simply cascaded for many inputs in one area

Direct Input
In addition to the BestSelect inputs the IRPKIT4 also has one optically isolated Direct Input. The Direct input is designed to be connected directly to the IR blaster output of another device. It contains some cunning circuitry such that whatever the connections are on the other device, as long as they are supposed to drive an IR blaster then connecting them to this input will work! This is an optically isolated and fully ESD protected input. Optical isolation means that the signal is connected via light. There is no electrical connection between the input and the output for this input. Useful where a DC connection might result in damage to the source equipment, HDMI extenders for example.
From 2013 onwards many of the TVs from LG, Samsung, and Toshiba feature integrated IR blasters, and the output from these can be connected directly to this input to better distribute the signal.

USB Power connection
The IRPKIT4 requires 5V @ 1.0A. The connector is a type DC 1.3mm and is wired centre +ve. A USB cable is supplied such that power can be provided either by the plug in mains adaptor or via a PC or set top box with a suitable free USB socket.

Four Dual Emitter Outputs
There are four outputs on this distribution amplifier and all are capable of driving any of the Keene IR emitters. The total output is electronically limited and short circuit proofed so as not to overload the USB connection. The output is ESD protected. The output is 5V positive going data and is relative to ground (negative rail) so is an easy interface for connection to other equipment. The unit can be used to provide an optically isolated input for larger and more complex installations.

Direct Input: A direct cabled connection may be made from the IR Blaster (wand) output from any other manufacturers device to this direct universal input only. This input will NOT work directly with an IR receiver.
Technical information - 3.5mm Stereo jack socket
Any combination of two out of the three connections may be used. It does not matter which is positive and which is negative. The supplied signal should be designed to drive an IR blaster and be no less than 4v peak to peak and no more than 24v peak to peak. A mono plug may be used if required.

IR Outputs: The four output sockets are identical and emitter wands may be connected to any or all sockets as desired. The sockets are compatible with both single, dual and high power emitter wands.
Technical information - 3.5mm stereo jack sockets
The body / barrel of the socket is the ground or negative connection. Both the tip and the ring are connected to the output via small current limiting resistors. A blaster IR emitter diode may be connected to either the tip or to the ring connection or to both for a higher output. It is highly recommended that a stereo plug be used for the output connection but a mono plug may be used but will waste a lot of the output as the ring connection gets shorted to ground. The total output across all four output connections is limited to approx 800mA peak. The output drive of 5V is sufficient to drive 2 diodes in series as is typical of the twin blinking emitters. IR emitter diodes should never be operated in parallel without a series current limiting / balancing resistor.

Positioning emitters: All the emitter diodes are directional (rather like a narrow torch beam) and this should be borne in mind when positioning the emitters. The universal wands and blinking wands are designed to be affixed directly to the equipment fascia. The high power emitters can be positioned up to 10 meters away from the device to be controlled and must be pointed directly at it. The Universal wands can also shelf mounted up to about 2 metres away BUT the diode must point at whatever you want to control.

Positioning receivers: Take care when positioning the receiver. The wideband receiver can be affected by IR interference from TV scan coils, LCD panels, fluorescent lights and direct sunlight. Because of the effects of filtering a wider bandwidth results in a poorer sensitivity. This means that the Standard receiver has limited bandwidth but a very good range (distance) and conversely the wide band receiver has a good bandwidth but poorer range. In general the standard receiver will give the best performance and the wide band should only be used if you have equipment that doesnt operate in the 40Khz band.

Splitters: The IRPKIT4 will NOT function correctly if signal splitters are used on either input or output. If more inputs or output are needed then use in conjunction with (or replace with) another Keene IR Distribution amplifier solution.

Housing 95mm x 50mm x 25mm
The fire retardant ABS box is extremely robust and has moulded flanges that allow the box to be very securely fitted inside AV
cabinets or behind displays.


We can also offer the IRPKIT4 in other configurations: