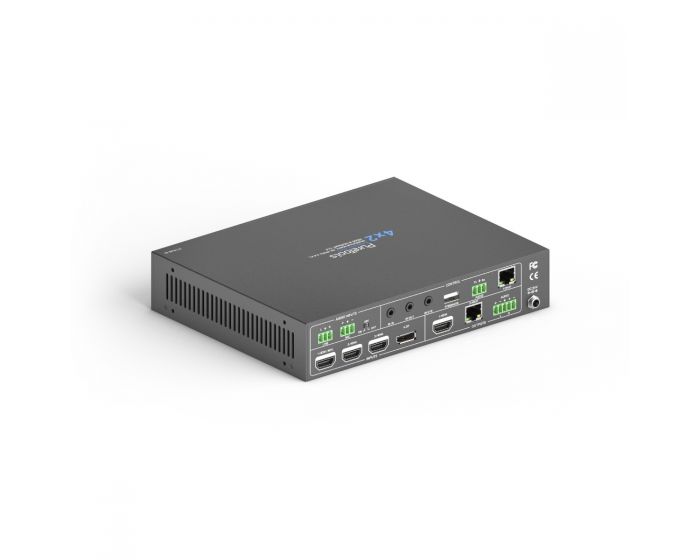 Skip to the beginning of the images gallery
Main Description

This UltraHD / 4K / 2160p compatible HDMI HDBaseT matrix switcher comes with a 4K HDMI2.0 HDBaseT receiver for use with a monitor in a distance of up to 70m. With the ability to route HDMI and DisplayPort input signals and scale the formats to the connected displays, the PT-PMS-42 simplifies integration and allows the simultaneous use of modern source signals (HDMI2.0, DisplayPort) as well as older signal types (HDMI1.4). The audio signal can be separately adjusted for HDMI and HDBaseT, including a bunch of integration and extraction options.

The 4x2 multi-format PT-PMS-42 presentation switcher and matrix scaler with four AV inputs combines the features of a 4K / UltraHD / 2160p AV matrix switcher and AV signal scaler with the benefits of HDBaseT signal transmission over a single Cat cable.

The HDMI inputs support resolutions up to 4K / UltraHD at 60Hz and with 4:4:4 color subsampling including HDR, 3D, HD lossless audio and up to 18Gbps bandwidth - For full support of thr HDMI 2.0 specifications.

This multiformat 4K matrix switcher with integrated scaler function offers a variety of control options. The input and output signals can be selected via the front keys directly on the device, via RS232, IR remote control (included in delivery) or via TCP/IP commands.

The control signals can also be transmitted bi-directionally over distances of up to 70m via HDBaseT.

The PT-PMS-42 comes with an HDMI 2.0 4K HDBaseT receiver. The 4x2 matrix switcher, together with the HDBaseT receiver, forms a stand-alone distribution and control system for applications, in which several signals with different resolutions need to be scaled, distributed and optimized for different displays.

The integrated scaling function, in combination with the various audio distribution options of the PT-PMS-42, outshines many of its competitors in the field of professional AV distribution.